In observance of Columbus Day, SouthState locations will be closed on Monday, October 10, 2022.

Keep informed with the latest market news and commentary.


US equities finished lower for a second consecutive quarter, leading to the S&P 500’s largest first half decline since 1970, down 20%, including a seven-week losing streak. Within equities, big tech names like Amazon (down 34.8% for the quarter), Facebook (down 27.5%), Apple (down 21.7%), and Google (down 21.7%) underperformed. More speculative investments like unprofitable tech, SPACs, fintech, crypto, IPOs and electric vehicles also came under pressure. Retail stocks lagged amid concerns about margin headwinds from excess inventories, dampened foot traffic, waning fiscal stimulus and the shift in spending from goods to services. Target (down 33.5%) and Walmart (down 18.4%) were some of the high-profile disappointments, while apparel retailers tended to see even more significant pullbacks.

Fixed income posted another negative quarter as well. The US Aggregate Bond Index returned -4.7% as yields rose broadly, bringing its year-to-date performance to -10.4%. Two-year Treasury yields were up 67 basis points on the quarter to 2.96% and ten-year yields up nearly 70 basis points to 3.01%. There were also bouts of yield curve inversion, an ominous signal for the economy if sustained.

In currencies and commodities, the dollar index jumped just over 7%. Gold was down 7.5%, while Bitcoin lost nearly 60%. West Texas Intermediate crude oil added 5.5% to post its ninth straight quarterly gain. 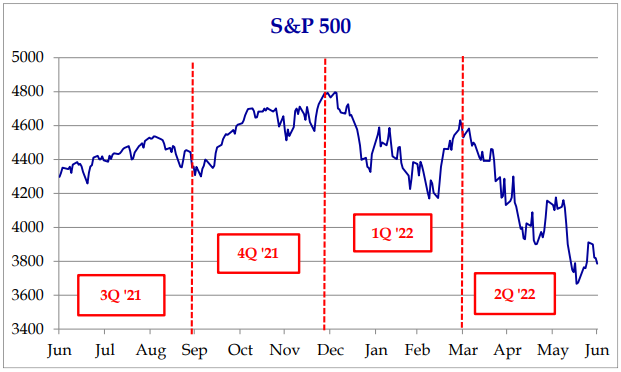 Inflation remained the big drag on risk sentiment in the second quarter. May headline CPI inflation came in hotter than expected, increasing 1.0% month-over-month and 8.6% year-over-year, the biggest annual increase since late 1981. Surging energy and food prices, where pressure has been exacerbated by geopolitical developments, were key upside drivers. Stickier sources of inflation, including those surrounding housing, were also elevated.

The Fed's increased focus on inflation led to a more aggressive pace of rate hikes following the 25 basis point increase in March. The central bank raised rates by half a percentage point in May and 75 basis points in June, and guided for a 50 to 75 basis point rate increase in July. The second quarter also saw the Fed provide details on quantitative tightening, with runoff caps starting at $30B a month for Treasuries and $17.5B for mortgage-back securities in June, before rising to $60B and $35B, respectively, after three months.

The outlook for the second half warrants a measured amount of caution. The pace of inflation may be poised to moderate, especially if the recent correction in commodity prices continues, but how quickly it comes down will be key in determining how urgently the Fed goes on tightening monetary policy. Complicating things, economic growth has clearly slowed from last year, and economists have generally been lowering their projections as tightening measures have begun to take effect.
Stay informed on the latest market information with On Point® Market Commentary

About Us
Help
Bank On the Go
Connect with Us

You are now leaving our website to visit a site operated by a third party.

South State Bank does not provide, and is not responsible for, the products, services, overall content, security or privacy policies on any extenal third-party site, and their level of security may be different from ours. Please refer to their privacy policy and terms of use for details.

Internet Explorer is not optimized to work with SouthStateBank.com

In order to have the best experience on this site, please ensure you have the most up to date version of Google Chrome, Mozilla Firefox, Microsoft Edge or Safari.